The experience of more than 75 years and the constant technological development are FAPA´s pillars in the search for permanent improvement. The reliability of its entire range of products is supported by own tests and in independent laboratories in the country and abroad, complying with national and international standards. The fact of obtaining the basic minerals from its own fields, gives FAPA the character of an integrated company with optimal growth prospects. In this way FAPA maintains national leadership and is strengthened internationally through its export presence.

In 2003, the company achieved ISO 9001 certification, committing itself to the continuous improvement of its processes and with the purpose of increasing the satisfaction of its clients, positioning itself as a leading company in its field. 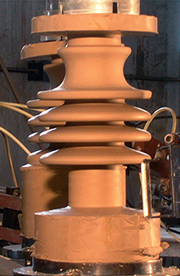 FAPA was founded in 1938 in Monte Grande, in the town of Esteban Echeverría, in the province of Buenos Aires, Argentina.

At present, in an area of 27.000 m2 with 22.225 m2 of covered space, is the industrial plant, the administrative offices and the sales department.

Its founders were Professor Don Leopoldo Armanino and his brother Aquiles who with a great spirit of work and research undertook the task of building this factory, which at first was oriented to the production of hotel ware. This is how the first white ceramic company was born in Argentina. With the events of the time, World War II mainly, a parenthesis opens in the imports that supplied the needs of the country, which until then was primarily cattle farming. These facts make the brothers think of replacing the manufacturing of chinaware for porcelain for electrical use, adapting the facilities for a serial production of insulators and with the firm purpose of making a high quality product that would manage to impose itself and eliminate the dependence from abroad.

This was widely achieved and today, with more than 75 years of experience, FAPA makes the constant technological development its tool of permanent improvement.

In 1954 FAPA built the first and largest High Voltage Laboratory in Latin America, with capacity in impulse values of up to 1,100,000 volts. As a result of this important work, the company became the only one at the time with the appropriate technology to develop the manufacturing of insulators for high voltage lines (132 and 220 kV).

Then came a period of great growth accompanying the development of the 60's and 70's with the vigorous push of a national industrial bourgeoisie, which was the engine of Argentine development. During this period, FAPA was present in most of the major energy transmission works, such as the first Nihuil I and II, Atucha, the 132 and 220 kV lines and the vast majority of the country's Agua y Energía Eléctrica lines.

In the 70's and before the technological requirement for the new 500 kV lines, FAPA contracted the assistance of a prestigious Japanese firm. The application of new manufacturing and control techniques and a team of highly trained technicians and engineers managed to give the company a high degree of competitiveness.

This improvement is still in force, being updated with the incorporation of new products, whose reliability is endorsed not only by tests in its own laboratories but in others of recognized national and international prestige.

The plant is currently located on a 27.000 m2 site in the town of Monte Grande and with its production fully meets the requirements of the national industry.

All the steps of manufacturing charge in such a way a singular relevance in order to obtain the optimum quality of the element, that is transferred in an effective service during definitive installation. The production of dead-end and suspension insulators, line-post and pin type insulators, post insulators for stations and disconnectors and a wide range of technical products for other applications stand out.

Also since the beginning of the 90's, research and development of a line of polymeric insulators, which were launched on the market in 1995, began. These insulators, although they are not substitutes for porcelain by their characteristics, have had a great development and FAPA occupies a place of importance in the national market.

FAPA has mining companies producing the different raw materials used for the ceramic process. These enterprises are located in different parts of the country.

FAPA, as the market leader and serving all the distribution companies in the country, directly or through public works contractors, its objectives are not limited to the national scope but, with a defined exporter profile, projects to the Latin American area covering the needs of multiple companies that provide energy generation, transmission and distribution services.

Thanks to the determination of FAPA's board of directors and the joint work of professionals, technicians and specialized operators, this company produces results that boast an industry of vital importance in the national energy development.